Has Anyone Had Heavy Implantation Bleeding And Still Was Pregnant? (What To Know..)

If you have unprotected sex during the fertile days of your menstrual cycle, the chances of getting pregnant is high. In case the sperm fertilizes the egg, an embryo is formed. This takes place in the fallopian tube.

The uterus wall will then become thick to protect the embryo. The embryo then travels to the uterus, where it gets implanted into the uterus lining. Once this happens, the pregnancy is considered successful.

Sometimes, when the embryo attaches to the uterus lining, the blood vessels burst, resulting in light bleeding. This is called implantation bleeding, which is an early sign of pregnancy.

How Can I Tell It’s Implantation Bleeding?

Implantation bleeding occurs typically 10-14 days after conceiving the baby i.e. around the same time as your normal menstrual period. Thus, the bleeding can be confusing.

Besides, you will have other signs of pregnancy like

In addition, you can always take a pregnancy test to confirm. This test will measure the level of hCG (Human chorionic gonadotropin) in the blood, which is created by the placenta for the growth of the embryo.

Implantation bleeding will have the below signs.

It is normally easy for you to make out implantation bleeding as you know what your normal menstrual bleeding looks like.

What Treatment Is Recommended For Implantation Bleeding?

Implantation bleeding is harmless and goes on its own within a few hours. Thus, it does not require any treatment.

But if the bleeding persists and becomes heavy, you are menstruating, or there is a medical complication. You can conduct a pregnancy test, and based on the test, you can meet a doctor.

Has Anyone Had Heavy Implantation Bleeding And Still Was Pregnant?

Implantation bleeding will never be heavy. If the bleeding is heavy and not the usual menstrual bleeding, it can be due to an underlying medical condition. Normally any of the below conditions can cause heavy bleeding during pregnancy.

Apart from heavy bleeding, an ectopic pregnancy will also have pain, diarrhoea or constipation, dizziness or fainting. If you suspect pregnancy and experience any of the above symptoms, you should consult a doctor without delay.

If you are pregnant and experience heavy bleeding, another cause could be loss of pregnancy. The bleeding will be heavy and might have clots. Stomach pain, lower back pain and change in vaginal discharge are other symptoms of pregnancy loss.

If you were on a birth control pill and became pregnant once you stopped it, the hormonal changes in your body can cause heavy bleeding. Also, if you were using an intrauterine device before getting pregnant and had contracted an infection, there is a chance of having heavy bleeding.

Sex during the early stages of pregnancy can cause bleeding as the cervix at this time is very tender and sensitive.

Implantation bleeding is common during pregnancy. There is no reason to worry as long as it is light and stops within 1-2 days. But it is always best to inform your doctor about any type of bleeding.

In case you find out about the pregnancy, and the bleeding becomes heavy, you should rush to a doctor without delay. Similarly, if you develop pain or dizziness, then also you should consult a doctor. The doctor will conduct the necessary tests to rule out complications. 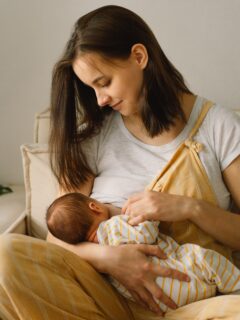 Previous
Will A Clogged Milk Duct Eventually Dry Up? (Everything To Know...) 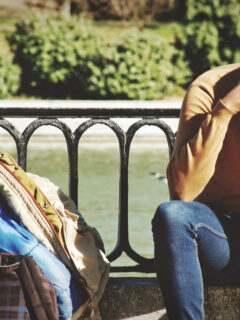 Next
Why Does My Husband Get Angry Over Small Things (10 REASONS!)
Comments are closed.