Can Toddlers Tell When Someone Is Pregnant? (SURPRISING TRUE STORIES!)

There seem to be so many stories of toddlers picking up their mom’s pregnancy before the mom even knows herself or before she has told anyone else. So it begs the question, can toddler sense when someone is pregnant?!

How could this be?!

While most of this evidence is anecdotal and not scientific, there do seem to be way too many stories about this to ignore…

Can Toddlers Tell When Someone Is Pregnant?

You will find so many moms who claim that their toddlers picked up their pregnancy before they even knew, either by asking about the baby in mom’s tummy or talking about a brother or sister arriving soon.

Toddlers are amazing at picking up changes at home and detecting a rise in stress levels and are more aware of their surroundings than we might give them credit for. They do seem to have a sixth sense for their moms being pregnant!

Toddlers Pick Up More Than We Know

Many moms think that their toddlers have sensed their pregnancy all on their own, but in many cases, the toddler may have overheard their parents talking about a new pregnancy or a new baby.

The toddler might not even be aware of what it all means, and just blurt out random words that they have heard their parents say, such as “baby in mom’s tummy”.

If the parents don’t think that their toddler has heard them speaking about the pregnancy, it can come as quite a surprise!

If the mom doesn’t know about the pregnancy yet, there are still some signs that the toddler might pick up on. Mom’s hormones would be changing, and this could lead to mom acting differently and even appearing more stressed.

Toddlers pick up on these small changes, and it could lead to them saying something funny that might insinuate pregnancy, which is even more likely if they have been around someone else who is pregnant.

On the other hand, toddlers also have some very random thoughts, and could also point out someone is pregnant even if they aren’t! It definitely isn’t an exact science.

Do Toddlers Get Clingy When Mom Is Pregnant?

It is quite common for toddlers to become clingy when their mom is pregnant, especially if they have some sort of understanding that there is a new baby on the way.

A lot of attention will be put on the new baby, with mom and dad getting ready for their arrival, buying new gear for the baby, and everyone making a fuss over mom and her pregnant tummy. While this is not done to push the toddler to the side, it could cause them to feel this way.

Because of this, toddlers do become clingy when their mom is pregnant. It is almost regressive behavior, as they want to be carried around and be treated like a baby again. It can be highly frustrating for a heavily pregnant mom, especially if her toddler hasn’t acted like this before, but you need to see it from the toddler’s point of view.

The clingy behavior should go away on its own, but you can ease it by spending quality time with your toddler without talking about the baby, and also include your toddler in the pregnancy, such as getting them to feel the baby kick, and even picking out some toys and clothes for their new sibling.

In order to really believe why so many moms are convinced that toddlers can sense pregnancy, you need to hear a few stories of when it has actually happened.

Here are our three favorite stories from the internet where moms were convinced their toddlers magically sensed their pregnancy!

One mom claims that her toddler daughter arrived home one day from daycare with a drawing she made of mommy, daddy, herself, and a new baby brother!

Mom had no idea she was pregnant, but a few days later a positive pregnancy test confirmed this, and it did turn out to be a baby boy!

A mom was lying on her bed one day showing her little son her belly button, and her toddler all of a sudden asked “mommy, what’s that baby in your tummy”.

The mom had no suspicion that she was pregnant but took a pregnancy test a week later and the pregnancy was confirmed.

The toddler also correctly guessed that he would be getting a little sister!

(Did you just get chills reading that, because I know I did!)

Another mom had her 3-year-old son come up to her and tell her a beautiful story of how his mommy had a baby in her tummy.

The mom asked why her son had told this story, and he said it was because mommy really did have a baby! After writing the story off as his imagination, a pregnancy test was done and the toddler was right!

How To Tell Your Toddler You Are Pregnant

If your toddler hasn’t picked up on your pregnancy before you have, or if they have said something that makes you feel like they could know, you might want to know how to tell them you are pregnant!

When to tell your toddler you are pregnant is up to you, but many recommend that you should wait until you tell everyone else.

There are two reasons for this – one is that you would have waited until the pregnancy was confirmed and fairly safe to let everyone know, and secondly, your toddler might be excited to tell absolutely everyone that you are pregnant when you might not be ready for others to know!

It is also a good idea to tell them when you are starting to show, so they can better understand the pregnancy, and that there is an actual baby growing inside of you.

You will know the best way to talk to your toddler, and slowly start introducing the idea of a baby brother or sister to them.

Have them involved with the scans, getting the baby’s nursery ready, picking out a name, and planning some fun things to do with their new sibling.

There is no hard evidence that toddlers can sense pregnancy, but a toddler has guessed that their mom is pregnant one too many times for it to be random!

If you have a toddler and they point out that you have a baby in your tummy, you might want to take a pregnancy test!

Enjoyed this? Make sure you read these next:

When Should I Start Buying Baby Stuff While Pregnant? (FIND OUT!)

How to Hide a Pregnancy Bump for 9 Months (7 EASY WAYS!) 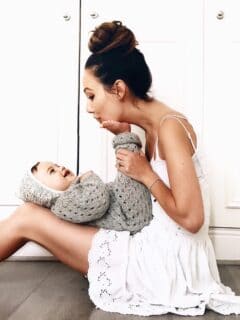 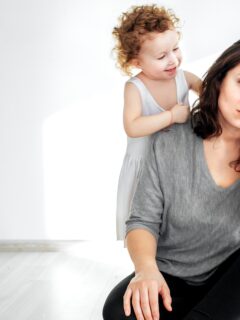 Next
When Does Parenting Get Less Exhausting? (4 Tips To Handle Burnout!)
Comments are closed.