Are There Foods To Heal Subchorionic Hemorrhage? (EVERYTHING TO KNOW!)

Pregnancy is a condition in which you do not experience vaginal bleeding for months together. But in some rare cases, vaginal bleeding occurs during pregnancy. According to the American College of Obstetricians and Gynecologists, around 15-25 in 100 pregnancies experience bleeding during the first trimester.

Most cases of bleeding during early pregnancy can be mild and involves only spotting. But some can be severe and require immediate medical attention. One such type of bleeding that occurs during the first trimester of pregnancy is called subchorionic hemorrhage. To learn more, keep reading…

Although there isn’t a particular food or diet that heals subchorionic hemorrhages, there are some anecdotal stories of woman feeling better after adding pomegranate juice, green leafy vegetables, and a lot of water.

However, these claims haven’t been verified and can be an urban myth.

The best thing someone can do with subchorionic hemorrhage is get plenty of rest and avoid lifting heavy.

What Is A Subchorionic Hemorrhage In Pregnancy?

Subchorionic hemorrhage is a type of bleeding that occurs between the amniotic membrane and uterine wall. This results in vaginal bleeding. In severe cases, the placenta will even get detached from its original place. This condition is also called subchorionic bleeding or subchorionic hematoma,

Some types of haemorrhages can be small that you may not even realise it. They can be detected only through an ultrasound scan. However, sometimes the bleeding can be severe. Subchorionic haemorrhage is the major cause of bleeding during the first trimester of pregnancy.

What Are The Causes Of Subchorionic Hemorrhage?

The exact cause of subchorionic hemorrhage is not known. However, certain factors can increase the risk of developing this condition.

Is Subchorionic Hemorrhage Harmful To The Baby?

Not all subchorionic hemorrhage harm the baby. If you have small or moderate bleeding, it often goes away on its own. However, if the bleeding is heavy, you should consult a doctor immediately.

Sometimes it increases your risk of miscarriage or preterm labor, especially if you are a matured mother-to-be.

If the placenta detaches from the wall, the membrane that holds the fetus will also break, resulting in a pregnancy loss.

How Is A Subchorionic Hemorrhage Diagnosed?

Subchorionic hemorrhage is diagnosed mostly through physical examination. The doctor may also recommend an ultrasound scan and blood test to confirm the condition.

If the woman has a subchorionic hemorrhage, the part of the uterus where the haemorrhage occurs shows up in the ultrasound scan. This helps the doctor to clearly understand the extent of damage and where exactly the bleeding is occuring.

How Is Subchorionic Hemorrhage Treated?

The treatment for subchorionic hemorrhage depends on which stage of pregnancy you are in and the location and size of the hemorrhage.

If the condition developed before 20 weeks of gestation, the doctor will ask you to reduce the level of physical activity and take proper bed rest which helps to control your blood pressure.

This includes avoiding travel, and sexual intercourse. You should be careful not to stand for long or lift heavy weights. Similarly, all types of exercises like walking, jogging and cycling, should also be avoided. If there is excess bleeding or contraction, the doctor will recommend hospitalisation.

While taking bed rest, doctors suggest sleeping on the side with the knees and hips bent. Keeping a pillow between the knees makes you more comfortable.

If subchorionic hemorrhage develops after 20 weeks, your doctor will let you know about the signs of early labor. If you experience contraction, the doctor will provide preterm labor treatment. A sonogram will be done once a month to check whether the condition is resolving. This also provides a clear picture of the baby’s growth. If you are more than 24 weeks, the doctor would even suggest hospitalisation. However, no surgery is required for treating subchorionic hemorrhage.

In case your blood type is Rh-negative, the doctor will administer RhoGam injection to prevent complications in future pregnancies. Some doctors will also prescribe progesterone therapy to prevent miscarriage and sustain the pregnancy.

How To Manage Your Health During Subchorionic Hemorrhage?

There is nothing much you can do to prevent subchorionic hemorrhage. However, it is very important that you stay physically fit during the pregnancy. To ensure this, you should take the below steps.

You can also take some prenatal vitamins after consulting with your doctor.

How Fast Can A Subchorionic Hemorrhage Heal?

Subchorionic hemorrhage is like a bruise on the skin, which heals on its own through proper care. Most cases of subchorionic hemorrhage will self-heal within 1-2 weeks with proper bedrest. By the time you enter the second trimester, the hemorrhage would have healed. But in some rare cases, the symptoms can remain for a long time until delivery.

When the hemorrahge is healed, you will notice dark red or brown discharge from the vagina.

How Is Subchorionic Hemorrhage Different From Spotting?

Spotting involves just a few spots of blood in your panties. Most pregnant women experience spotting during the early months of pregnancy when the implantation of the fertilised egg takes place. This is a normal phenomenon that stops once the implantation phase is over.

In subchorionic hemorrhage you will notice both spotting and bleeding in your undergarment. You may need a panty liner to manage the bleeding.

Sometimes the bleeding can be due to other serious conditions during pregnancy. Explain all your symptoms to the doctor. Timely consultation with the doctor prevents further complications and helps save the pregnancy. 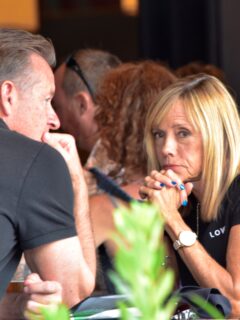 Previous
Husband Looks At Other Woman (What It Means & What To Do!) 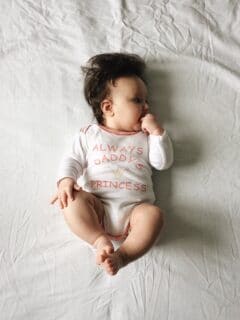 Next
196 Stunning Middle Names For Chloe (Plus More!)
Comments are closed.